Skip to Content Skip to Main Navigation Skip to Search

The ESKAPE project aims to collect and develop an information basis about climate adaptation to make GIS-based data available to the StädteRegion Aachen's administration. Ultimately the goal is to help ensure that climate adaptation in future planning is sufficiently considered by gathering and making current data available to all participating municipalities of the StädteRegion.

The ESKPAE project, which is funded by the German Federal Ministry for the Environment, Nature Conservation and Nuclear Safety, started with the project kick-off date in September 2015.

The project team consists of the Institute of Urban Planning and Transport (ISB) as coordinator, the teaching and research area Physical Geography and Climatology (PGK) at the Insitute of Geography at RWTH Aachen University as well as the industries partners StädteRegion Aachen and Wasserverband Eifel-Rur (WVER).
Action and consideration Strategies concerning climate adaptation in urban planning could be developed due to the regularly held project meetings, participation in external events for further education, and the organization of workshops.

The GIS platform developed in the project context ties in with the already existing GIS strategy of the StädteRegion Aachen and will continue to be provided, maintained and updated beyond the project period.

The ESKAPE project will end with the project report in spring 2019. However, the project should, furthermore, be seen as a future-oriented test project. Ultimately, such a GIS system should be developed on a nationwide basis so that climate adaptation can be adequately considered everywhere, especially in weighing and environmental assessments in the future. 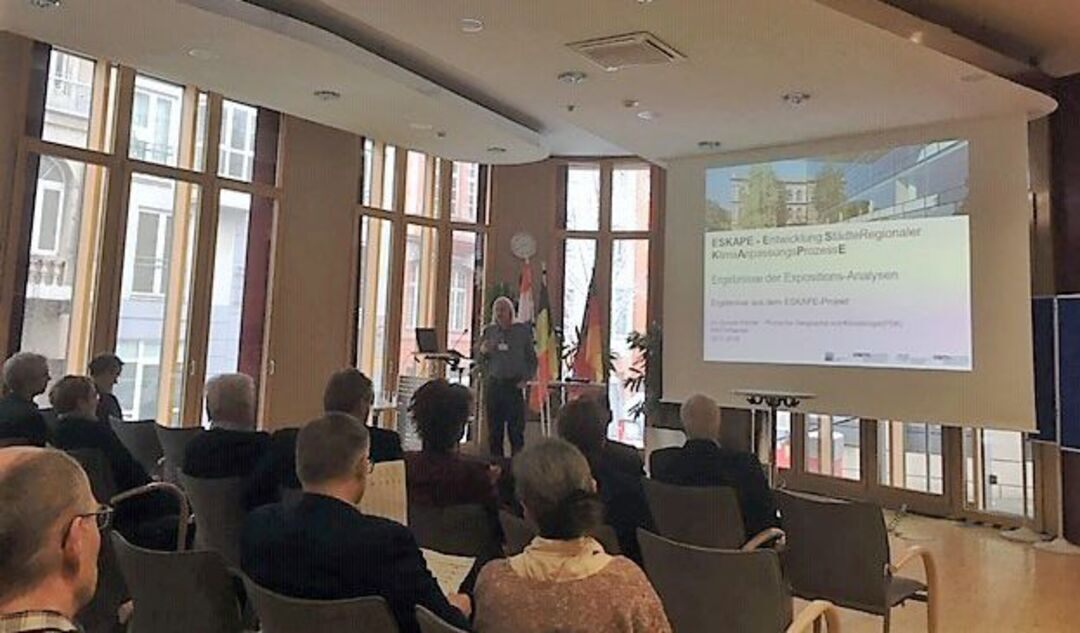 The kick-off event in fall 2015 started the ESKAPE project, which was funded by the Federal Ministry for the Environment, Nature Conservation, Building and Nuclear Safety. Since then, more than three years have passed and a GIS platform ("inkasPortal") with a comprehensive data collection and a guideline ("Checklist for climate-adapted land-use planning") has been developed.

In addition to the networking and competence building process, geo-referenced data were collected and made available on the "inkasPortal" of the Aachen 'StädteRegion' (= city region).For this purpose, first modeling and GIS analyzes were carried out on climate change impact in the Aachen region with respect to thermal stress, heavy rainfall and cold air currents.In parallel, the project team identified socioeconomic data to map sensitivities.Finally, the established exposures and sensitivities were superimposed to identify the vulnerable areas, with regard to the effects of climate change, in the Aachen city region.

With the aid of the information bases developed in practical urban or other design, the planning authorities are provided with information about where increased climate change impacts can be assumed. Thus, a possible increased concern can be included into concepts, but also in the balancing and in the environmental assessment.

The closing event in the spring of 2019 ended the ESKAPE project and the GIS platform was made available to the municipalities.The project can be seen as a pioneering test project.Ultimately, such a GIS system should be developed comprehensively, so that the topic of climate change adaptation can be adequately taken into account in long term administrative action.